Ameli and I spent a day out in London today, with a visit to Hamleys Toy Store (more on that later), lunch at Planet Hollywood, and then a first-for-us visit to Ripley’s Believe It or Not.

Ripley was an American cartoonist, entrepreneur and amateur anthropologist, who created the Ripley’s Believe It or Not! newspaper panel series, radio show, and television show which feature odd facts from around the world. He himself explored  over 120 countries of the world, collecting the weird, the wonderful and the down right bizarre.

Ripley’s Believe It Or Not! certainly contains a collection of eclectic things, from the portrait of Brad Pitt made entirely out of cigarette ash, to the somewhat disturbing picture of Kennedy made out of butterfly wings, to the really clever snake effect portrait of Mrs Obama, made out of bottle tops. 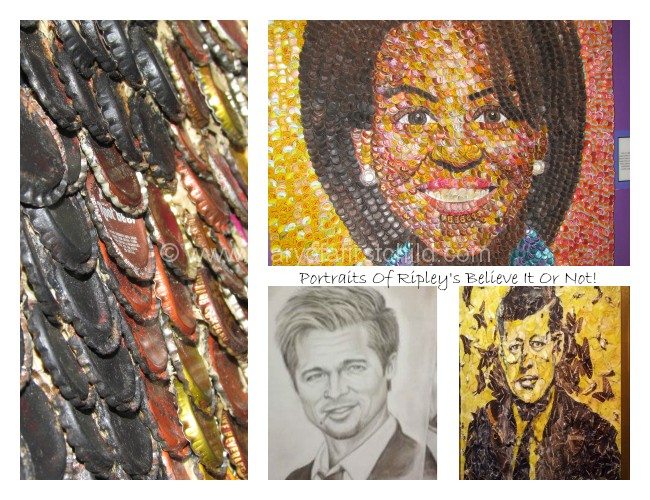 Just around the corner from those I found an original (first edition?) Peter Pan, which I found a little exciting and a Rip Van Winkle too, although I may have been the only one that knew what that was!

One of the more ‘or not’ parts of the Ripley’s Believe It Or Not! showcases a sheep with two heads, a lamb with five legs and chicken with three drumsticks, all critters apparently born so naturally. There was also a large dinosaur roaring and writhing around, not sure where he fits into the story, but also an original ‘fake’ mermaid, stitched together by a fisherman who managed to con a lot of people into believing it was true, and a fur covered Canadian fish! 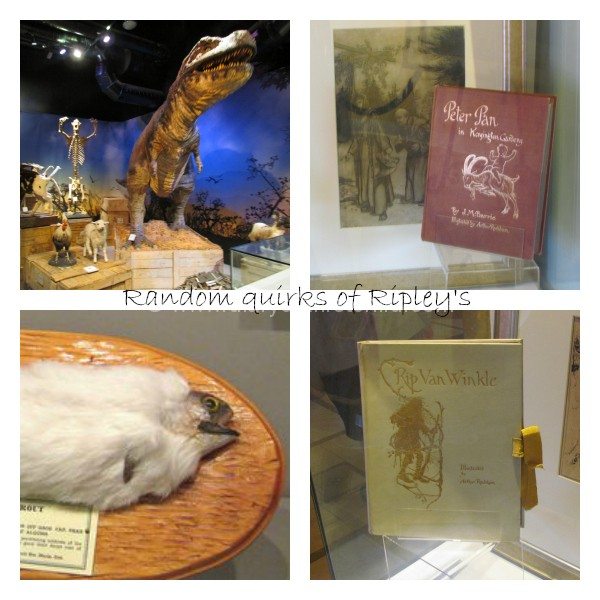 Ripley’s has the worlds smallest car and its three seater version too and currently are host to a Swarovsky covered Mini Cooper too – all rather quirky.

While some parts of the exhibit feel a little like the freak circuses of years gone by, where wealthy people would visit to laugh at and mock the deformed, there is more of it that isn’t like that, and is just really interesting.

Depending of the age of the children you’re with, a journey through the exhibits can take as little as 2 hours or as long as you and they stay interested, as there is also an audio guide that you can pick up to guide you through the various parts.

There are some interactive exhibits too, like the tallest man in the world – Ameli on my shoulders didn’t quite measure up, and the heaviest person too, a whopping 450-odd kilograms. Ameli on the scales was a bird-like 20kg next to him.

If you’re less into the unusual and more interested in the almost-real, check out Madame Tussaud’s too!

Ripley’s Believe It Or Not!

– Very spacious so it doesn’t feel too crowded
– Loads of unusual things appealing to varied interests
– Suitable, with a few macabre bits, to the whole family

A definite winner for us was the mirror maze. Dimly lit with red runway lighting, I cant imagine it to be very big, since the exit and entrance are only a meter apart, but we did have fun in it, chasing, finding and losing our way till we accidentally happened on the exit. Ameli loved it so much she wanted to go again.

Another fabulous feature was the tunnel, a stationary bridge inside a rotating tunnel splashed with specks of UV paint and UV lighting. We crossed the bridge a dozen times at least, and I must say I was a lot less steady on my feet than Ameli was!

The final activity on the ground floor of Ripleys, and accessible without visiting Ripley’s Believe It Or Not! is a Laserace, where you have to cross a room avoiding the lasers, Nightfox style. Its great fun too. We really enjoyed ourselves and had a good laugh at that. Its a pity it was so late in the day for us already as we could easily have had a few more goes at both the maze, the tunnel and the Laserace. 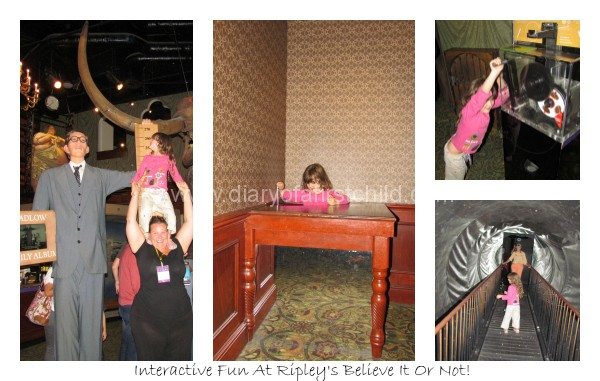 Its a good size for a trip with children, and a great mix of historic artifacts, weird trinkets and fun things to keep everyone occupied for a few hours.

Ameli and I loved our day together, our day out in London, and our time spent together, visiting Ripley’s Believe It Or Not! London.

Tickets:  From £12.99 if booked online in advance, more on the door (and 15% off if you’ve bought a ticket from the Planet Hollywood London gift shop)

Luschka is a mum of two, currently living on the Isle of Wight and saving pennies for as many mid week and weekend getaways as one summer can hold.

Land Of Kids Festival, London
Ripley’s Believe It Or Not, London
Hamleys Toys, London
Kids Go For £1 & More Great Offers In London This Half Term